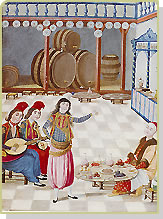 Europeans, who have actively dealt with Turkish history, Turkish state, legal, social, military system, culture, and customs as a matter of investigation throughout the centuries, did not fail to consider Turkish music either. One can find countless European sources on Turkish music. These sources constitute so extensive a literature that, one researcher on his own may not be able to exhaust it within his lifetime.

European sources are worth considering in that, they throw light on the phases of Ottoman music which the historian of this music has not enlightened yet. Obviously, sorting out all the relevant material in these sources would make a significant contribution to the historiography of Ottoman music. The sources in question also reveal the European reception of Ottoman music through the centuries.

European sources may be divided into three categories: writings of (a) general historians and orientalists; (b) of historians of music and musicologists; and (c) of travellers and observers. Since the travelogue is a genre originating from live observation and experience, the products of this literature deserve special attention. Historians of music and musicologists of the past centuries often worked only on written material, and it may be the case that they had never heard Turkish music played. However, travelogues, diaries, memoirs, and letters written by European visitors provide observations and clues to what Turkish music of the past centuries was like and how it was received by Europeans.

At first, Europeans showed interest only in the military music of the Turks. The earliest contacts with Turkish music had started as early as the period of the Crusades, but they did not leave any lasting traces. We find few travel accounts with mention of music from the fourteenth and fifteenth centuries. As a matter of fact, there was a widespread prejudice in Europe at the time that Islam had prohibited music and that the Turks ignored all musical genres except military music. Probably, the sole significant European contribution in the fourteenth century was made by Bertrandon de la Brocquière (c. 1459), a French traveller. Bertrandon was at the court of Murad II in Edirne and listened to epic songs (Chansons de Gestes) from minstrels, and "merry", "joyous" and "cheerful" Turkish folk and popular tunes.

More comprehensive works on the Ottomans started to appear in the sixteenth century. The observation peculiar to this century is marked by impressions from the mehter, the janissary band. Folk music and urban light music were also considerably mentioned, and painters of the century represented the mehter and the instruments of urban light music. Pierre Belon du Mans, a French observer who was in Istanbul between 1547-1554, wrote that the Turks were more talented in playing the string instruments than the people of France and Italy. Apart from Belon, the travellers of the century did not receive favourable impressions from the music they heard in Istanbul. Almost all the observers complained about the "noisy" performance of the mehter, and expressed that Turkish music, which was in fact the music they heard on the streets, grated the ears and the nerves. The fact that the focus was on military music was quite natural in that the Ottoman empire was then at its peak as a military power and Europe was under its threat in the sixteenth century. However, this military threat did not prevent Turkish music from having its effects on Europe. Many European countries which had hitherto dispensed with military music started to develop military bands, and others felt it was necessary to improve military music. Moreover, English, French, and German military units set up military bands which resembled the mehter.

Europeans started to take greater interest in Turkish military music in the seventeenth century. This century witnessed several travellers who tried to approach Turkish music with an objective attitude, or even took pleasure from the performance, which was described as noisy by the observers of the previous century, was now praised and appreciated by the Italian geographer Luigi F. Marsigli, and the well-known French orientalist Antoine Galland.

In this century one finds several observers who listened to classical Turkish music, that is, the secular art music of the Turks, and also Mevlevi music, music of the "Whirling Dervishes". As a matter of fact, the common aspect of the seventeenth century observers is that they did not limit Turkish music only to military. A short passage from a Mevlevi music composition, by Sieur du Loir, French tradesman and traveller who spent seventeen months in Istanbul in 1639-1640, and three classical songs, notated by Giovanni Battista Donado, Venetian Bailo to the Porte in 1680-1684, are the documents of the interest in Turkish music in a broader sense. Probably the most interesting considerations about Ottoman music in the seventeenth century that can be found in French are writer and folk-tale collector Charles Perrault's Paralleles des Ancients et Modernes. In this striking work, three music lovers discuss several aspects of Turkish music, not in terms of personal taste but in a more objective way, or even with an academic interest. What they tried to make clear can be summed up in the following points: The Turkish ear is pleased by the natural scale, which is different from the Western scale; since the Orientals are accustomed to the natural scale their ears are more sensitive, therefore, they have more talented performers; the Turks are unaware of consonant sounds, hence have cultivated only melodic music which lacks harmony of several parts; although Turkish music is incomparable with that of the Europeans, the great variety of Turkish melodies and musical instruments may contribute to Western music.

The eighteenth century is a period when Europeans investigated Turkish music in the most serious and detailed manner. This century is an era during which classical Turkish music flourished and matured. On the other hand, in the same period, European classical music had begun to undergo transformations. It is the time of Haydns, Mozarts and Beethovens producing compositions. The symphony form was introduced, and percussion instruments became more important and their use became more frequent. For instance, the cymbals, which had hitherto been rarely used, became one of the permanent components of the orchestra. A new kind of music, which is louder in tone, hence suitable to express stronger and more emotive feelings, as opposed to relatively soft music of the previous period, i. e. Baroque music, was in the course of its formation. Numerous Western observers used to find the Mehter performance too noisy and shrill, but in this century one sees a great number of observers who do not get irritated by the same Mehter. Actually, eighteenth century was an era when "Turkomania" spread throughout Europe and when Prussia, Russia and Poland were eager to set up authentic Mehter bands. This change of attitude may probably be ascribed to the transformation in Western music.

Apart from the developments pertaining to the structural changes in Western music, European outlook on Turkish music had acquired a curious perspective in the eighteenth century. The broadening horizon of European culture had an impact on the reception of the observers visiting Turkey. The conviction directing this new tendency was the assumption that the vestiges and remains of the legendary Ancient Greek music still survived within the musical tradition of the Middle-Eastern peoples, i.e. in Ottoman music. Some observes tried to draw resemblances between Turkish attitude towards music or Turkish taste and that of the Ancient Greeks, others looked for the antique echoes of Ancient Greek music in Turkish tunes and instruments of music. Pierre Augustin de Guys, for instance, a Frenchman who spent many years in Istanbul and Izmir, suggested that the köçekçe dance and tunes must have originated from Bacchus rites.

Terence Spencer, who wrote an outstanding book on the European search for Ancient Greece through "new Greece", has shown that the Europeans who started to visit Greece from the sixteenth century onwards could find nothing in this country in terms of the arts and sciences, nor could they observe the intellectual and ethical qualities of the Greeks whom they believed to be the descendants of the Ancients. In their assessment the science, arts and ethic of the Antiquity had disappeared under Turkish oppression. However, people's temper, their way of life, their entertainments and their music had not undergone considerable changes. It seems music is the sole fine art through which the eighteenth century Europe could have a sense of historical continuity between the "new" Greece and Ancient Greece. Needless to say, it lies outside the scope of our perspective to judge how realistic this attempt was. The interesting point for our concern here is the emergency of such a reception in this century.

Up to the end of the eighteenth century what we can find about Turkish music in European sources is to a great extent based on observation and experience disappear in the nineteenth century. This is a period when orientalism was established as new discipline. We know that the nineteenth century orientalism considered, with a few exceptions, only the written sources of the East. It was possible for the scholars to find the classical sources of the music of Islam in European libraries. Since these sources of Oriental music were written either in Persian or Arabic, and also because the terminology of Turkish music was borrowed from or based upon these languages, orientalist attitude did not hesitate ascribing Turkish music to Persian or Arab music. Being deprived of observation caused many European scholars to be misled. Fétis and Kiesewetter, for example, two well-known historians of the nineteenth century who had never heard Turkish music described it to their readers in a most misleading way. Actually, the works of these "book-musicologists" have severely been criticised by Turkish musicologists Rauf Yekta and H. Sadettin Arel in the twentieth century.

Presently, Turkish music has become a subject of scientific research. Today in Britain, Germany, United States and other western countries there are serious scholars who are working on Turkish music, but this is the outcome of the second half of the twentieth century. One of the main causes of this delay is the conventional orientalist attitude of the nineteenth century, which also had an impact on the narrowly pro-Western Turkish Republican attitude of the 1920s and 1930s which did not consider Ottoman music to be an integral part of "national" Turkish culture. If the nineteenth century scholars had evaluated live observations of Ottoman music made in the seventeenth and eighteenth centuries, Turkish music might have become an object of scientific study much earlier and more extensively, both in the Western world and Turkey.