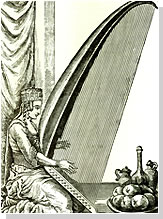 The çeng belongs to the family of instruments known in organology as "open harps," which are further divided into the "bow harps" and the "square harps." The çeng is in the latter groups.

Of the square harps used for 2,500 years in not only the Middle East but in Central Asia and the Far East as well, the Ottoman çeng was the last to fall into disuse.

The father of the Ottoman çeng, which in Ottoman poetry was a metaphor for one in love doubled over in agony from a lover's cruelty, was the Iranian çeng. But in Istanbul, the instrument gained certain features. Writers such as Safiyüddin Urmevî (-1294) and Abdülkadir Meragî (1350-60-1435) gave detailed information on the çeng. The Persian manuscript, Kenzü't-Tuhaf, written in the 14th century, gives a good deal of information on the çeng. But the poetical work of the 15th century poet Ahmed-i Dâî titled Çengname put the çeng in a very privileged place among the other Ottoman instruments. This was because no such work had ever been written - poetically or prosaically - about any other Ottoman instrument. Besides the "market paintings," which were made by folk painters outside the palace for European travelers, most of which are to day in European museums, there are many miniatures depicting the çeng along with other instruments, in albums such as the Sehinsahname, the Süleymanname, the Album of Ahmed I and the Surnâme-i Hümâyûn. A careful examination of these reveals the following:

1. The çeng was played by both men and women.

2. Miniatures depicting the çeng show it accompanying talks by poets and learned men than on the stage.

3. Though it is difficult to speak of a standard size of çeng, it becomes clear that there were two sizes of the instrument. The first, the "kucak çengi" (lap çeng) was small and played indoors, seated. The second was the "açık hava çengi", which was quite large and played standing up. The kucak çengi was played with the pegboard on the player's left knee; the açık hava çengi rested on a long foot that went between the player's legs, and tied around the waist by a belt attached to the lower part of its body (that is, the resonator).

4. The çeng's resonator was constructed in two ways, either curved or straight. While the curved resonator is encountered in Iranian, Arab, Uygur, Chinese and even Japanese miniatures, the straight resonator appears only in Ottoman miniatures.

Possibly, when the Ottomans adopted the çeng that came from Iran, another closed harp descended from the Phoenician harp was in use in the Byzantine period. After the Iranian-derived Ottoman çeng was abandoned, the above mentioned triangular harp was in use in Istanbul, especially in some homes in the Pera district. The fact that in miniatures this instrument, which we can claim was never played in the palace, is shown in the hands of women in palace attire, is not difficult to explain. The market painters were not like the palace artists, who were closely familiar with palace life. For this reason, elements of palace life were mixed with those of outside life.