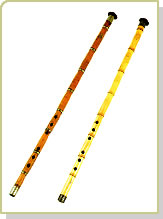 The ney is the principal wind instrument in Turkish classical music. The term is derived from the Persian nay, "reed." There are seven finger holes, six on the front of the instrument, and one on the back. A mouthpiece, generally made of buffalo horn, called baspare, is attached to the blown end. Silver rings called parazvane are attached to either end of the instrument to prevent cracking. The lowest tones are called the "dem" (breath) tones. The semitones unique to classical Turkish music are achieved by opening some of the holes either half or one fourth of the way. Other semitones are achieved by a slight turn of the head.

The ney, together with the kudüm, are the two main instruments of Mevlevî music, but have been widely used since very early periods in secular music as well. There are several different sizes of ney, each with its own name, including (from low to high register) bolahenk, davut, sah, mansur, kizneyi, müstahsen, and sipürde. These names are used as tunings (ahenk) in classical Turkish music. Of the twelve sizes of neys, seven are tuned to natural tones, and five to half tones. The half tone of each of the chief tones is known as maybeyn. There are also neys an octave above the lowest register neys such as bolahenk and davut neys; these are known as nisfiye neys.