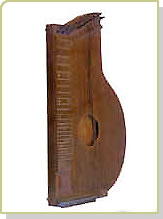 The santur belongs to the group of instruments known in organology as "hammered kitharas." The ancient Greek word kithara is the common name given to instruments with multiple strings arranged parallel to the sound board, in which each string gives a fixed tone. The resonator of kitharas generally consists of a box of which the face and back are parallel. The kanun, for example, is a plucked kithara.

The ancient Assyrians and Egyptians are known to have had a harp-type instrument, sometimes held horizontally, the strings of which were struck by sticks. Even if this is not a santur, it is the idea that gave rise to it. Chronologically, the plucked kitharas predate the struck kitharas. The first santurs are believed to have been played in ancient Mesopotamia. They were predecessors of today's kanun, played with mallets instead of plectra. Strings of instruments in the santur group are arranged and tuned in groups of three, four or five.

We have no absolute knowledge concerning the construction of either the old Iranian or old Ottoman santur. The santur played in Iran today is quite different from the Ottoman santur of the 19th century, which does not resemble any other santur that has survived to our day. None of the very few 19th century Ottoman santurs extant today resemble each other in terms of dimensions and number of strings.