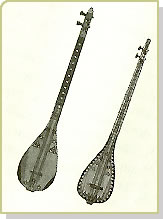 a. Divan Sazi:  The Divan Sazi is the largest of the Baglama family.  It is also called the Meydan saz. The name is believed to be related to the fact that in meetings of asiks, they would challenge each other (Turkish: meydan okumak, to challenge)..

b. Baglama:  The baglama is smaller than the divan sazi and larger than the tanbura. In the cities, it has more frets than in the villages.

c. Tanbura:  An instrument between the cura and baglama in size, it occurs in many regions of Turkey.

d. Cura:  The smallest member of the baglama family, it is found in nearly every region of the country under a variety of names, including dede sazi, parmak cura, and üç telli cura.  According to the instrument with which it is to be played (and accordingly its exact dimensions and tuning), it is known by names such as baglama curasi, tanbura curasi etc.

The largest number of strings to occur on a saz in the baglama family is twelve.  Besides being played with a plectrum, instruments in the baglama family are also played in certain regions with the fingers of the right hand.  In the Teke region of southwest Turkey, there is a small saz known as the parmak curasi, played by tapping the strings at various places on the neck with the index finger of the right hand and hammering/plucking with the fingers of the left hand.

The number of frets on baglamas changes according to region.  However most of the standard baglamas built today have 17 frets to the octave.

We find different tunings (düzen) of the baglama in every region of our country. Today, nearly 30 different tunings have been determined. The four chief tunings are known as baglama düzeni, bozuk (kara) düzen, misket düzeni and müstezat düzeni. The reason we call them chief tunings is that they provide the possibility of reinforcing the fundamental with an open string, and of playing in different positions. The names of a few of the other turnings include ferahi düzeni, yeksani düzeni,  hüzzam düzeni, abdal düzeni, ümmü düzeni, fidayda düzeni and karanfil düzeni.