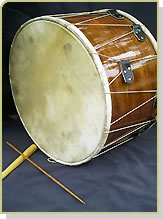 Davul
The most characteristics of the Turkish folk percussion instruments, the davul is played in every region of the country. It is a double-headed drum. It is beaten with a heavy stick with a knob on the end held in the right hand, called a çomak or tokmak, and a thin stick held in the fingers of the left hand, called a çubuk or zibzibi. The word "davul" is probably derived either from the Turkish "toval, tovil or tovul," or the Arabic "tabl." The term "dool çalmak" in the Kirghiz language is the same as "davul çalmak" (to play davul) in the Turkish of Turkey. Known by a variety of names including tabulga, balaban and davulbaz, the davul is played in villages either by local musicians or by a subgroup of the Rom known as the Abdals, and in the cities, by mehter (Turkish military) bands and western style bands.

This is a goblet-shaped drum, played in several parts of Anatolia, popular among women musicians as well. It is originally made of red clay. The goat or cow hide stretched across the mouth creates a pleasing sound, especially when heated. The darbuka is known by several names throughout Anatolia, including dümbelek, deblek, dömbek, deblek, güpgüp. It is also a custom among women to play washbasins, copper buckets and copper jugs.

Wooden spoons used for eating are also used as a percussion instrument.  Typically held two to a hand, they are commonly used in folk dances in areas including the Konya, Silifke, Balikesir and Bursa regions. The most favored spoons for playing are made of boxwood.

This instrument consists of a doubled piece of metal in the shape of tongs, divided at the ends. To the ends are attached several small cymbals opposite each other, which sound when the tongs are squeezed shut.

Known in every region of Anatolia, the tef consists of a frame 20-40 cm in diameter with a thin skin stretched over one side.  3-5 pairs of brass cymbals may be mounted in slots opened in the frame.