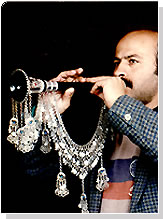 The zurna is made up of the following parts:  The wooden body (gövde), the reed (kamis), a round piece resembling a button, called the avurtlak, and the staple (metef or metem), to which the reed is attached. There is also a detachable section of the body called the baslik (headpiece) or neyik.  These different parts vary according to region. Seven finger holes are opened in the top of the body, and one thumb hole in the back. The front holes are known as "hava döndüren deligi" (holes that turn the air); the thumb hole is known as the "soluk deligi" (breath hole) or "dös deligi" (breast hole). The wide bell of the zurna′s body is called the kalak in some areas. On the bell are small holes which are not fingered. These are called cin deligi or seytan deligi (demon holes; devil holes).

It is common instrument, played together with the davul (double-headed drum) in nearly every region of the country. Going from west to east, we see a decrease in the size of the zurna. The reed position also changes according to region; in the east, it is set vertically, while in the west it is placed horizontally.

The mey is a widespread instrument in Eastern Anatolia. It consists of the main body, the reed, and the kiskaç, or "pincer," a piece that keeps the reed flat. It has seven holes on the top and one thumb hole in the back, and a range of an octave.

The sipsi is played in the Aegean region, and the Teke region in particular. The body is approximately 20 centimeters long. The cukcuk, the single reed consisting of a piece of cane with a flap opened in the side, fits into the body, and measures up to 5 cm in length. The sipsi has five or six holes; some players do not use a thumb hole. Its range is 1.5 octaves.

In our country, the çifte (meaning "double") is played mainly in the area around Zonguldak on the Black Sea, as well as Central and Southeast Anatolia. It consists of two sections of reed tied side-by-side, with 5-6 holes on the top side. The holes may equal in number on each reed, or may occur singly on one side.

Played in the Kilis and Hatay regions, it resembles the çifte in construction. The most favored ones are made of eagle bone.