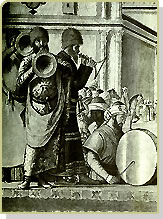 RENOVATION IN MUSIC AFTER TANZIMAT

It is known that until the XVIIth century, polyphony in Europe was in continuous development in church only. It is also known that folk music of that era had created for itself a different quality than the music of Eastern civilization. During the crusades the Europians had seized several musical instruments from the Asians. These instruments were put to use in Europe when groups played music which did not have religious qualities. Arabs of Spain had carried the Asiatic music to Europe at an earlier time. In contrast to al these, we can say thar during the XVIIth century some Catholic missionaries had tried to introduce the form of polyphony to some distant cultural centers in Asia. However, the teachings of these missionaries had to cover vast areas of land, and as a result their efforts proved to be worthless. When we refer to the musical movements in our country, we can't refrain ourselves from remembering some of the Catholis communities in Galata and Izmir, two leading centers in Turkey. There were several churchs in such communities, and organs were locked in them.

In other communities where Europe trades people lived and also in the French embassy, musical gatherings and dance parties were held in which instruments such as clavsen, violins and lute were played. In some records there are occasional reference as to the fact that sometimes Turkish guests were invited to such gatherings, and this often gave rise to verbal discussions of Eastern and Western music. However, partly due to the different training of the ear, and partly to the difference in opinion, always there has been an opposition to those first patterns of Western music in Turkey. This resistance on our party very much resembles the resistance of the Catholic church to the instrumnetal music. It also resembles the unwillingness on the part of the Arabs of Spain for making attempts of "Organum". It even resembles the indifference of the Eastern church to the polyphony of the catholics. During those centuries polyphony had mystical qualities. The "Grup Music" of Muslims, on the other hand, was played by stringed instruments and had profound qualities. Its tonal character required a different technique of ear training. Not only songs of foreign tongues, but also musical instruments of foreign lands were not popular at all in Turkey. The Turkish "Grup Music" and the Turkish folklore owe the preservation of their originality and their development to these conditions. However, these contitions party changed when a profound musical development became visible in the West, but stil the influence of the Western music was far from penetrating into the Turkish culture. This time it was due to geographic conditions. In its private corner polyphony of the West had tended to develop in complexity. Virtuosity had become popular and had developed as a technique of stringed instruments. These two hand also drawn a barrier between the two worlds. In other words, Turkish culture couldn't absorbe harmonical music until the beginning of the last century.

We see a slight change in this situation during the first years of "Tanzimat". Groups that resisted improvements instead affairs as well as in music had come face to face with other groups of intellects who had new and fresh ideas. Such new groups took up this problem of music rather in an amateurish way, but due to their good intentions they were not far from producing an effect. In consequence the principle which said "First intellectual inclination, afterwards renovation in art" became an ideal for these new intellectual groups. This situation resembles the birth of opera in Florence as a result of the situmilations of the Humanists.

For the first time among the Eastern an the near Eastern cultural centers, the Sultan's Palace in Istanbul became insterested studying and learning the Western music. Famous maestros such as Giuseppe Donizetti were invited to Istanbul in 1828.  Before this date, around 1820, bands were formed for the newly established military troops. These bands were called "tambur-major". Altough Mehterhane was abolished for the first time in 1826, a military institute of music, called "Muzikai Hümayun", was founded in 1831. this new school was under the supervision of the Sultan.

The conservatories of Europe were established after this school in Istanbul, and they did not include all kinds of musical studies in their cirriculum. Evidentally "Muzikai Hümayun" had priority over the schools of  music in Europe.

Sultan Abdülmecid, a music lover himself, had wished that his subjects would also enjoy the melodies of this new form of art. In order to show his enthusiam, not only he had constructed a theater building, called "Naum Tiyatrosu", in Beyoglu, Istanbul, but also he had attended every performance and had coverded the deficit from the national treasury. The operation of this theater continued for 30 years at the end of which the building was closed ( 1840-1871). However, another theater house was built in Besiktas, Istanbul.

Besides the military bands, there were  "chamber music groups" in the palaces. These groups gave concerts to women who lived in harems  and to men who were in "selâmlik". Harem is the section where women live and "selâmlik" is devoted to men. The musicians of such groups that played for women were all women. They used to give concerts in men's attire. During those years only a conservatory in Venice used to accept women students. Naturally, foreigners who attended concerts in the Otoman palaces were amazed immesely when they witnessed Turkish women playing musical instruments such as violin, bass, flute and even French horn.

What a pity that this school of the Sultan's palace could not take a further step in its development. It could only provide the education in music enough for chamber concerts. No instructure ever thought of training a soloist. No attempts were made to organize a national opera. The schools curriculum excluded courses in composing music and chorus singing. No one gave credit to the idea of sending fifteen or twenty very young students to the leading conservatory in Italy. Even providing a general cultural background for the students was neglecded. The sultan had asked a famous violonist to came to Istanbul and see the school. In 1848, Henry Vieutemps paid a visit to this school  with  his pianist wife. He had nothing but said words for the inadequacy of the faculty members of the school. This great artist had raised the first graduate violinist of the conservatory of Budapest. We understand that he had not wished to be included into the faculty of "Muzikai Hümayun".

Sociological crisis and wars often upset the development of music in Turkey. In short, the improvement of out activities in music had to wait until the days of the Turkish Republic (1923) when a new ministry of education was to be founded and when studying in music would begin on sound basis in Ankara, capital of Turkey. Detailed study of music was included in the programme of  Atatürk, the leader of modern Turkey. The first step came out of the combined efforts of the old palace musicians and the young musicians of the republic. Together they gave the first symphonic concerts.

All the factors which had caused retrogrations in music during the old days were eliminated when a new school, "Musiki Muallim Mektebi" (School for Instructors of Music) was opened  in 1924. In 1936, "Musiki Semineri" (Seminary in Music) and State Conservatory came into existance. Then, in 1946 a state opera and a state theater were opened. A presidental philarmonic orchestra and a presidental band were formed in 1924.  A school for military bands, radio stations and a seperate orchestra for the opera started to operate as years went by. Chorus singing, musicians who were educated in Europe, amateur organizations, repair shops, Publishers of music sheets, an organized archive for Turkish folklore (1937) and a school for ballet (first graduates in 1957) followed the other institutions.

A large number of composers made outstanding contributions. Among them Adnan Saygun, Cemal Resit, Ferit Alnar, Necil Akses and Ulvi Erkin are worth mentioning here.

The energy and desire of the young musicians promise a thiriving future. We have now not only group playing of singing but also soloists and artists with strong cultural backgrounds.

The musical developments in Istanbul are not less than the development made in Ankara. The conservatory in Istanbul frequently gives symphonic concerts and chorus singing. The construction of a new opera building will be completed soon. Just recently preperations were completed in Izmir for opening a conservatory. Other cities are also busy improving their resources in music. All the schools have improved their courses in music.

The development of music is taking  modest bu reliable steps in Turkey.

2  A. Galland. Istanbul'a Ait Günlük Hatiralar: 1972-1973. (Evliya Çelebi. Who is a contemporary of A. Galland, describes Nefir which is also mentioned in A.Galland's book. According to Evliya Çelebi Nefir is a musical instrument which is in the category of Zurna of flute, but it gives the sound of a bugle, and its size is rather large. There were holes on it, and an opening called "SIPSI" which was placed between the teeth when playing.

3 In 1839 prime-minister Mustafa Resit Pasa had proelaimed a detailed law which aimed to make reforms in the administration and political fields of the Ottoman Empire. This movement is called "Tanzimat".